I'm munching on a unique biscuit in between typing sentences - a wholegrain biscuit that is actually light and fluffy! I've tried subbing whole grain flour for all-purpose in my basic recipe before but have always been disappointed with the heavier texture and slightly bitter flavor. I solved the flavor problem by getting a grain mill and using fresh-ground flour instead of stale store-bought, but the texture was still an issue. Until today!

I decided to take Gnowfglin's Sourdough Ecourse and so I have just begun using my sourdough starter. Today I had increased my starter more than I ended up using for pancakes, so on a whim I decided to try biscuits. I had a recipe on my harddrive that I adapted a bit, and here are the results - 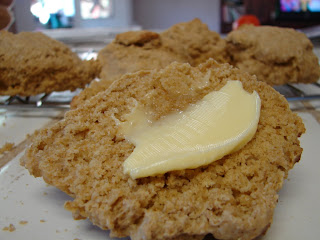 Quite light for a whole grain biscuit, I'm very pleased. You can see by the color they are whole grain, and the flavor is as robust. I used a blend of half and half hard and soft white wheat. I don't care for the stronger flavor of the more common red hard wheat. I sometimes use spelt as it is a milder, nutty flavor that I really like. I baked these in a cast iron skillet that I placed in the oven before preheating it. I baked them at 475F, a very hot oven, because I've found that with quick breads, a higher temp gives a better oven spring so the final product rises higher & fluffier. Yum!

I am so excited that finally I have a successful sourdough starter going, and that I have a way to make biscuits with my fresh whole grain flour that doesn't result in hockey pucks!!
Posted by Velcromom